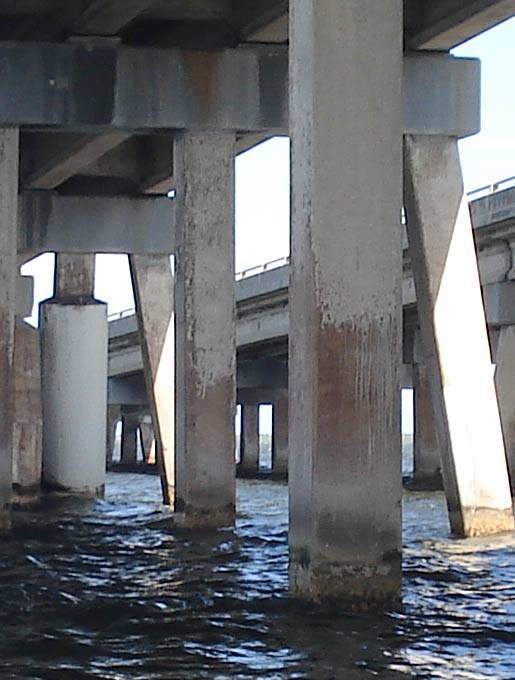 SIMCO’s scope of work in this project was to conduct concrete characterization and a complete condition assessment of the reinforced concrete elements of the Indian River Bridge, Kennedy Space Center in Florida.

The specific objectives of the investigation were to establish the current condition of various structural elements and evaluate exposure conditions and deterioration mechanisms affecting the structure. The specific reinforced concrete elements that were analyzed as part of this investigation included the piles, pile caps, beams and deck elements of the eastbound and westbound structures.

SIMCO conducted an optimized testing program to generate as much information as possible from the fewest practical number of core samples per element.  The results obtained from the concrete characterization testing and analyses of chloride contamination levels identified that at least some elements had been protected from chloride ingress to a certain extent. It was determined that chloride contamination levels were more severe in the piles than in any other element and the presence of the coating did not prevent corrosion initiation.

Numerical calculations conducted using SIMCO’s STADIUM® numerical modeling tool indicated that corrosion had already initiated for some time in the splash zone, however, for the airborne exposure zone, corrosion initiation could be expected in about 16 years. It was also determined that corrosion initiation may also affect the beams and analyses conducted on the cores extracted did not show any evidence of coating or protection against chloride ingress. Theoretical simulations also indicated that the pile caps and the deck were not affected by corrosion, and should not be for the next 20 years.

Analyses conducted using SIMCO’s STADIUM® numerical modeling tool provided a clear assessment of the current condition of the different structural elements and generated valuable information that would be used to model the future deterioration of the structure, and the durability of repair and rehabilitation alternatives.

SIMCO’s analyses provided information that would be helpful in optimizing concrete materials used to build the replacement structure and in validating that the reinforced concrete elements would satisfy service-life goals established by the owner.